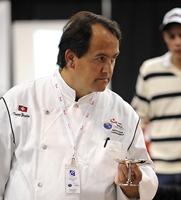 For many years Franz Ziegler has belonged to the world wide elite of Pastry Chefs and Chocolatiers. He was named „Pastry Chef of the year“ in 2008/2009 by the organisers of the World Pastry Team Championship. He was only the 8th Pastry Chef in total and the first non US resident Pastry Chef to receive this great honour.

His six books, Magic Chocolate, Chocolate Fantasy, mürb & knusprig, Magic Marzipan, CHOCOLATE COLLECTION and marzipan world have received numerous International book awards and have established him as a luminary in the industry.

Franz Ziegler acts as a think tank to the confectionery industry and also teaches at the BSA in Aarau. --> to the portrait