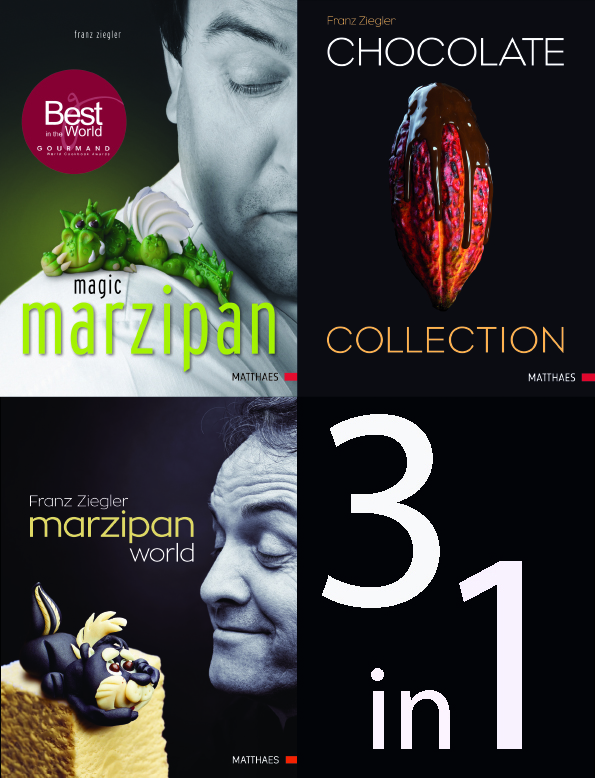 3 books in a bundle

Books signed by the author.

Delivery only within Switzerland

Have a sneak preview: –> Trailer

In this bilingual book (German/English), Franz Ziegler shows more than ever before that he is not just a confectioner and pastry chef but rather more an artist and creative spirit.

He has his own personal style and has further developed his techniques, particularly through his work with marzipan. His creations are unmistakably his and he is able to bring his marzipan figures to life; they are cheeky, innovative and each has its own character.

Throughout this guide, Franz Ziegler focusses on classic modelling techniques, therefore ensuring the efficiency of production. Since each component of a figure is individually displayed, beginners can also easily model them. The important steps are shown in pictures and also described in detail.

In addition to the comprehensive theory section, in which the entire range of marzipan models is explained, the book presents more than 200 creations, including animals, people, decorations and even more, showing that marzipan can be used to conjure up almost anything.

Over 120 new creations, from easy to do to ambitious modelling. Sales hit you can implement tomorrow as well as fundamentals, beautifuly illustrated in step by step pictures.

Figurines which are instant classics, because they are easy and happy and find a direct way to the costumers heart. The pictures speak a simple but vivid language. I promise you, you have never seen more beautiful photos on marzipan.

The 20 years of Franz Ziegler’s work with chocolate is represented here at CHOCOLATE COLLECTION. With more than 200 figures it is the largest collection of this kind of “art” that has been published to date. This book is not just a treasure trove of ideas for both instructors and confectioners; it is also a compendium of Franz Ziegler’s work.

The book comprises three main parts: the largest part is of the new creations, then the best of „Chocolate Fantasy“ and last but not least the best of „Magic Chocolate“. A chapter on the various techniques used completes the book, making it a must for everybody who works with chocolate.